Like an outcry the elemental force of the orchestra shatters the silence, the storm on the coast of Cyprus rages incessantly. The wind whips, lightening cuts through the roaring skies. As Othello, the great general and commander becomes entangled in Iago's web of machinations; as the calamitous seed of jealousy germinates and Othello's love for his wife Desdemona begins to decay, even on their wedding day; as Desdemona, "nevertheless insists, although she senses or feels that this harm comes her way, and that Othello in his jealousy is really capable of killing her" (Amélie Niermeyer) – with his Otello Verdi created an operatic drama, the likes of which had never before been so tight, so direct, so intensive and so beautiful, and still today unmatched. 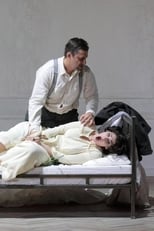